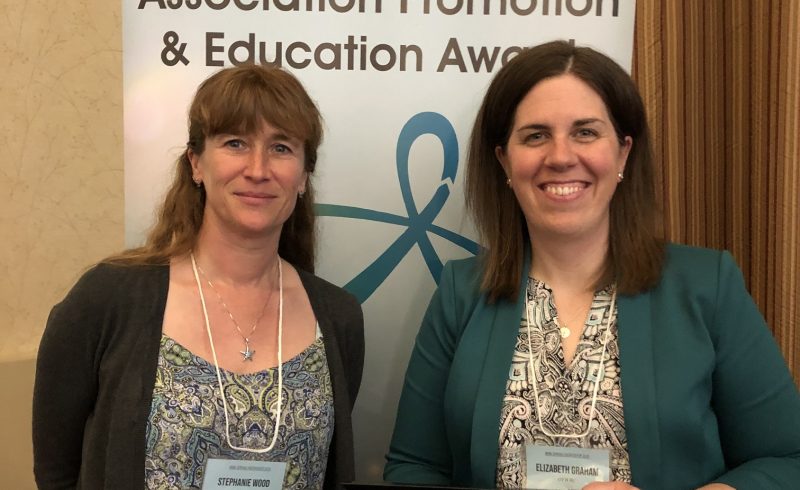 Once again, the Ottawa Valley Waste Recovery Centre’s (OVWRC) promotion and education program was recognized for excellence by the Municipal Waste Association (MWA).  The annual MWA Promotion & Education Awards were presented earlier this year at the MWA Conference held in Huntsville.

The awards recognize excellence in municipal promotional and educational materials that help contribute to an increase in both waste diversion and residents’ participation in diversion programs. Entries are reviewed by a panel of expert judges and scored based on planning and implementation, effectiveness, originality and creativity.

The Waste Recovery Centre was recognized in the Campaign category (for Municipalities with less than 39,999 households) for their 2018 Social Media Campaign – Does Not Belong in Recycling. The goal of the campaign was to educate OVWRC users on proper sorting of recycling.  The campaign used pictures of actual items received at the Centre’s Material Recovery Facility that were incorrectly placed in recycling.   Pictures of the items were shared on the Centre’s Facebook and Twitter accounts with a description of how to properly dispose of the material.

Some of the items incorrectly placed in recycling that were shown during the campaign included clothesline, a blow-up pool, chip bags, a floor mat from a car and a feather pillow.  Elizabeth Graham, OVWRC’s Communications Officer explains the reaction that the campaign received.

“In general, I think people were shocked at some of the items.  They couldn’t believe someone had thrown that into recycling.  Others admitted to being guilty of trying to recycle something that wasn’t recyclable.  Overall the campaign generated a lot of good discussion and engagement on our social media pages.”

Municipalities across Ontario are coming up with unique ways to educate residents and to combat the growing trend of “wish-cycling”; when someone tosses something into the recycling bin hoping it can be recycled when in fact it cannot be.  Sue McCrae, General Manager at the Centre explains why ongoing promotion and education campaigns are so important.  “Residents need to understand how to participate in our programs. It’s not enough to just recycle or compost, residents need to perform this task correctly.  Global recycling markets have strict quality standards that the Centre needs to meet.  When residents sort recycling correctly, we can send a better product to end markets.”

The easiest way to find out if something is recyclable or not is to use the on-line What Goes Where search tool on the Centre’s website at www.ovwrc.com.  It can be accessed both on desktop and mobile devices and you can search 100’s of items to see if something can be recycled, composted, reused or disposed of.

Mrs. Graham is appreciative of the recognition from the MWA.  “These awards allow Municipalities across Ontario to share successes and educate ourselves about the best way to reach the community with our messaging.  It’s wonderful to be a part of that alongside my colleagues.”

The Municipal Waste Association is an incorporated not-for-profit organization formed in 1987 by Ontario municipal waste management professionals to facilitate the sharing of municipal waste reduction and recycling information and expertise. 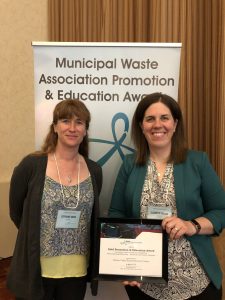 Ottawa Valley Waste Recovery Centre Financial Clerk, Stephanie Wood (left) and Communications Officer, Elizabeth Graham (right) accept the Gold Promotion & Education Award from the Municipal Waste Association on behalf of the Centre. OVWRC was recently recognized by the Association for their Does Not Belong in Recycling social media campaign.